Stanley Cup
All players are three dimensional and wear the uniforms of the two major teams Toronto Maple Leafs and Detroit Red Wings. The teams have been added extra strength as in that the talent scouts have succeeded in recruiting two right-grip marksmen. Together with a left forward that can get back behind the opponents? goal in ?the Gretzky position? and a centre forward that can go back into his own zone to build up the attack, there are all the prerequisites for taking your playing standard to new heights. Puck ejectors, plexi shields behind the net and goal counters go without saying in Stanley Cup. Equipment: Teams playing: Toronto - Detroit Goal counter, Plexi, Puck ejector Colour & Material: Playing board: Polystyrene/white Player: Polystyrene/hand painted uniform Goal: HD-ethene/red Puck: Acetal, polystyren/black Plexi: Polypropylen, novolen/transparent Other facts CE-mark: Yes Dimensions: 880 x 480 x 80 mm (L x W x H)

Other customers have also bought the following items 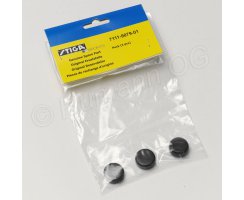